I have to be maxed-out impressed by this sidewalk art that creates vivid optical illusions.
Here are a couple pictures and here is the link for more: http://o.pticalillusions.com/3d-sidewalk-art/ 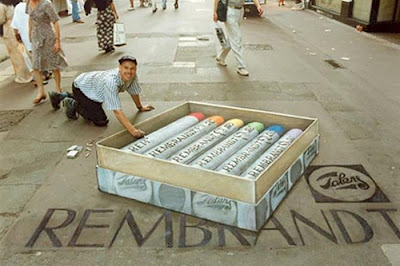 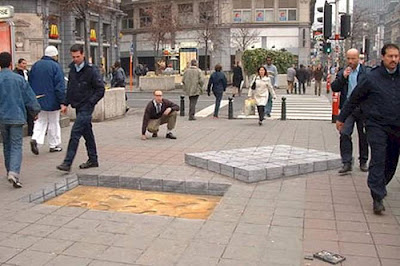 This from Hugh Hewitt's blog:

The American Thinker's Randall Hoven puts together a list of the inductees in the MSM Hall of Shame.

(MSM=Mainstream Media)
Posted by Liberty Spuds at 9:36 AM No comments:

THE letter-to-the-editor of the Year, so far ...

Nearly $7 million in U.S. Highway Transportation funds were secured by Senator Lamar Alexander for the construction of an unpopular funded Civic Arts Center located on the property of Maryville College. Most local taxpayers objected to the use of local tax money for this building which was not owned by the local governments. The Federal portion was just a forgotten background note as most citizens view Federal money as coming from some free source not directly linked to their tax dollars.

Now comes the Minnesota bridge collapse which is linked to a lack of funding (U.S. Highway Transportation) for repairing bridges. There is such a shortfall in available funding we hear that we might have to raise the Federal gasoline tax (which funds bridge repair). I say baloney! The funding to keep our bridges safe was there until numerous pork barrel projects such as the local Civic Arts Center robbed the funds.

Now to be sure, Lamar is not the only Senator to “bring home the bacon” from other Federally earmarked funds to his local friends. I am not trying to single him out. However, should Maryville College erect crosses in the lawn of the new Civic Arts Center in memory of the Minnesota people who died because someone took the funds from their bridge repair budget?

The Civic Arts Center was called a transportation improvement program in order to qualify for Federal funding. Was it given a higher priority than the Minnesota bridge? Pork Barrel projects always cost somebody; and some have paid with their lives. Kind of gives one pause before congratulating a politician for “bringing home the bacon”.

Where are the weenies from the ACLU!?!

Holes were drilled into his hands and knees before both legs were broken and acid poured over his face. Finally, the 30-year-old Iraqi was shot in the head. His crime? To work as an interpreter for the British military in Basra. (Source: TimesOnLine)

Well, that wasn't so bad. At least they didn't put a wet rag over his mouth and nose, or put panties on his head. If they'd done that, the ACLU, Amnesty International, etc, would screaming like hyenas and the ultra-liberal news media would be reporting that it is Bush's fault. (Source: Big Rattler)
Posted by Liberty Spuds at 9:15 PM No comments: